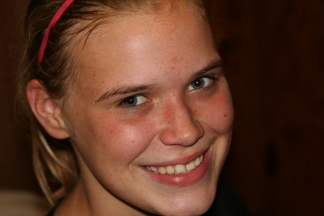 Grace loved to look at my scars and hear the stories of how I got them. “Tell me about this scar,” she would say as she traced her fingers over the two tiny circular indents on my forehead, wanting to hear about the epic case of chickenpox that left those battle wounds. “How about this one,” as she pressed on the hollowed out spot on my leg left from the basement game of hide and seek that ended me up in the ER. But generally, and arguably the most odd, was the amount of times she would say “and these,” as she traced the marks left behind after she caused her mama’s stomach to stretch so big, the skin just couldn’t hold up.

The most bizarre part of her fascination was how similar it was to my own. I would snuggle up next to my dad and run my fingers over the hand that was getting more and more disfigured due to a strange disease that caused his tendons to shrink. Every time he would walk around the house with no shirt on, I would look for the spot on his back where there was a scar left behind from a high school fight and I would listen to the story of how he was stabbed. And if you knew my dad for long enough, he would tell you the story of the playground incident that left the back of his head dented by the little girl who threw a brick at the German little boy who was teased for not speaking any English.

I remember loving to hear the stories, the stories that told about the scars.

The scars we hide tell stories too, don’t they? I have often wondered…what if our flesh showed emotional scars as a visible reminder of our pain and anguish, depression and fears, would we be more prone to tell their story, instead of hiding it?

I know that scar stories, about loss and pain, or joy and peace, are worth talking about. It brings to light feelings and thoughts that allow other people to not feel so alone.

Shared scar stories can help me look into the eyes of a grieving mother and tell her that it is absolutely normal to wish that the pain would just end. To go to sleep, praying that somehow in the middle of the night, God would take you home. It will give me the strength to stand next to a recently widowed women, being forced to embrace a future that looks nothing like what was planned, and gently tell her that she is not wrong to feel sadness mixed somehow with relief. Or to sit quietly with a friend, who finds herself marked with the scar of divorce or infidelity, leaving behind questions, doubts and lies from the enemy, who seeks to destroy any chance of recovery she might have.

In the Bible, there is a man by the name of Thomas, and I’m sure some of you are already saying his nickname in your head, but imagine you were there, and you saw Jesus die, you knew He was buried and you were grieving His death, wouldn’t you ask the same question? I won’t believe it until I see the scars. It was beyond comprehension that Jesus would be alive, and if He was alive, I would want to see the proof that He died; I would want to see the scars and hear the story.

This Saturday will mark four years since the accident that left us without our firstborn, Grace. I’ve often said, it’s not an anniversary, because anniversary’s should be celebrated. It’s just a day. On the calendar it could be marked “scar day” because it would leave behind the largest one to date. It doesn’t remind me of what happened, because if you carry around a scar, one too deep to ever cover up, you know that it takes nothing to remind you, not a day, or a smell or a word. It’s always there. You can feel it, see it and trace your fingers over it, every minute of every day. It becomes a part of you.

Sunday, January 26th will be my dad’s birthday. I remember sitting in the waiting room at the hospital on January 25th 2016, looking around the room at the faces that I loved, all overcome with disbelief and suffering, and a lucid thought made its way through my emotional wreckage. “Dad, what a birthday gift you’ve gotten this year, your precious baby Grace is home with you.”

But I can almost picture the moment she saw him and what she said…“Papa, lead me to the man with the scars on His hands, I want to hear His story.”

Scars and the Stories They Tell