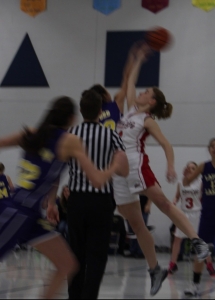 Basketball season started last month, but official games begin this week. My family is and always has been a basketball family. Jim played, Grace played, Evelyn plays, and I love watching. We spend much of the winter and spring months filling out brackets, watching teams that are underdogs, watching our favorite teams, and watching the ones that just keep winning, the unstoppable. Because of basketball, I have learned a lot about teamwork, what a good coach looks and leads like, what an encourager can accomplish on the court and on the bench, but most of all, what hard work and persistence leads to. Some of my favorite players to watch, especially in college ball, have been the ones that work the hardest, aren’t there for the 3 point shots, but are essentially what keeps the team together.

Aaron Craft was one of those players. Grace loved watching him play. We all did. He was just playing the game he loved, but he gave his absolute best every time he played. He never was known for his shooting, but people knew his name, because he worked hard. It was probably never easy, but nothing ever really is, is it? He had a Bible verse (Romans 5:8) written on his shoe during his college days, and with that knowledge, he inspired Grace. He inspired her to play hard and to try her best to glorify God on and off the court. Plus she thought he was cute, and she was hoping that someday they could meet and, cue Hallmark music, fall in love.

I’m not sure what it is about basketball season that makes it so much more difficult for me to keep my grief in check. Perhaps it was Grace’s love for the sport, or maybe that it kicks off the holiday season, which then leads into the January heaviness. Whatever the reason may be, basketball brings with it emotional highs and lows that are sometimes overwhelming for me. That being said though, there is almost no place I would rather be than watching Evelyn play, it was the same when Grace played. When you see your child doing something they love, with all their might, until their cheeks are red and their face is sweating, it brings a sense of joy to a parent. I love that feeling.

I have spent hours rebounding for both of them, and I have been there during the frustrating moments when, no matter how hard they tried, the ball just wouldn’t do what it was supposed to do. Grace didn’t like the extra work it took to be the best, she loved the game, but wasn’t a huge fan of the hard work. Evelyn, on the other hand, will do what she can to get better, to be better. She rarely is seen without a ball in her hands at home. She sits with it while doing homework, she sleeps with a basketball in bed with her and she shoots the ball when she has extra time at home, even after official practice is over. She puts in the work, but she knows it’s still not easy.

Someone asked me today if losing someone ever gets easier. I struggle with what to say sometimes to that question, because the last thing I ever want to do is make a freshly grieving person lose hope that it will ever get better, but no, it doesn’t get easier, at least it hasn’t for me. But grieving the loss of a loved one, especially a child, is hard work. Like Evelyn and her basketball, grief never leaves my side. I sit with it at dinner, while I work, while I sleep and even after a hard, long day of grieving, I grieve still. It doesn’t get easier, but hopefully I will get better. Not better in the sense that one day I will not miss Grace anymore, not better in the sense that grief will lift and I will no longer feel sad or angry or sometimes cold and numb. Better in the fact that because of the hard work of grief that I have put in, I can honor and glorify God in and out of the sadness. I want to be better, because Jesus has called me to be like He was, acquainted with grief…but willing to bear others sorrows.

So as the game begins tomorrow night, and we win or lose the tip-off, I will try to remind myself, that although the work is hard, the outcome is worth it, because looking more like Jesus in my daily walk, is always worth the effort.

Does It Get Easier?